Could you please relay the following to Mr Scorsese 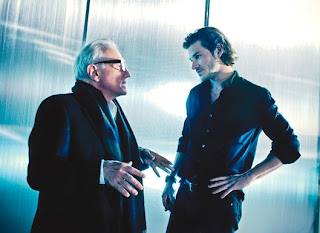 The world of high fashion and gangland auteurism were brought into thrilling embrace yesterday with the news that Chanel have employed Martin Scorsese to direct the commercial for their new line in men's fragrance. I know this because my wife, who works at Chanel, has been sitting on the news for the last three months, not even telling me until a week ago. She has the message discipline of the Stazi. He's shooting it in Williamsburg with the French actor Gaspard Ulliel who played the young Hannibal Lecter in Hannibal Rising. Naturally, one expects certain things from the maestro: a boys-are-back-in-town relish for the streets of New York; a series of flashbulbs going off in slow-mo a la Raging Bull; some jump cuts doing the work of a zoom, as they did during the pool sequences of the Color Of Money; a splashing of cologne on the walls in imitation of the blood bath at the end of Taxi Driver. I have communicated all this to Kate who will in turn instruct Mr Scorsese. I await the results with baited breath.