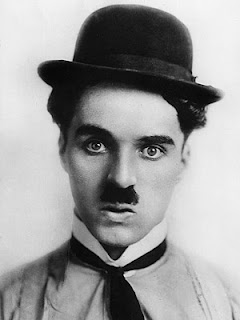 "In 1919, Charlie Chaplin had an idea for some fleas. Wouldn’t it be good, he thought, if a man accidentally opened his matchbox of performing fleas in a dosshouse? But he could find no place for the scene in the film he was shooting. He tinkers with the scene for almost a decade — wouldn’t it be good if inspected one of the fleas from a hobo’s beard, only to throw it away because it wasn’t one of his? — and almost got it into The Circus in 1928, and then The Great Dictator in 1952, but still it wouldn’t fit. Finally, in 1952, as the communist witchhunt closing in on him, the press baying for his blood, Chaplin makes his last film on American soil, Limelight, about a washed-up clown called Calverro plying himself with greasepaint for one last hurrah: In a flashback sequence, we see Calverro finally loose those performing fleas, but not the whole box: just two of them now, hopping invisibly from fist to fist.

There are many things to marvel over here: the Darwinian dedication to the evolution of a single gag; the almost inhuman time span, 40 years, half a life, the time it takes to find a wife and raise a family; but above all the steely discipline which led Chaplin to say no to himself, again and again, until the time was right — “His ‘no’ was the coldest and hardest I have ever heard in my life,” said one collaborator — or even, arguably, until it was too late and the gag had grown sodden with self-pity. And there you have Charles Spencer Chaplin. “The unhappiest and shyest human being I have met,” according to a reporter for the New York Times, quoted in Simon Louvish’s new biography of Chaplin, Chaplin: The Tramp’s Odyssey (Faber, pp412, pounds 25), which joins an already bulging bookcase of Chaplin biographies, not least David Robinson’s magisterial 1987 book, Chaplin, His Life & Art, whose major conclusion was that any man who devotes 40 years to the perfection of jokes about fleas is going to be lacking a few of the more basic life skills.

It casts a long shadow over Louvish’s book, whose first hundred pages are littered with nods to Robinson (“David Robinson recounts”), and full of diverting factoids on the history of the Vaudeville, Malthussian London and hoboes, but a little lacking in basic facts about Chaplin himself. Assuming that “the reader is by now reasonably familiar with the blow-by-blow accounts” of Chaplin’s life, Louvish aims instead to bring us the story instead of his onscreen persona — not the story of the man behind the mask and more “the mask before the man” — which sounds nice and postmodern, but turns out to mean something more basic: plot summaries. Given that in one six month period, Chaplin made upwards of 20 movies — three a month — that’s a lot pf plot summaries, and it’s no wonder many of them trail off into weary ellipses: “Much confusion ensues” ,“General chaos ensues,” “Mayhem results, et cetera.” And, my favorite: “Much but kicking ensues.”

You have to worry about anyone writing about Chaplin who dismisses mayhem with a mere “etcetera”: butt-kicking is the whole point of the man, his platonic essence, although there is also a strong case to be made for beard-pulling. Before his evolution into the lovelorn “little fellow” so beloved of audiences, Chaplin’s persona was a demonic sprite, more lustful and anarchic, like Mickey mouse in his earliest iterations. Louvish is good on the makeover: “No one more than Chaplin understood the potential power of the apparently unmoving close-up,” he writes. The early Keystone shorts had been crammed with people, props, gags; Chaplin emptied out the frame, drawing audiences in to focus on a single gesture — a shrug or a small kick, administered to no-one in particular, as the Tramp shuffles off into the sunset. Iris in, fade out.

That Chaplin’s most iconic shot was an exit should come as no surprise. His life followed much the same course, from teeming multitudes to final exile, in 1952, when Chaplin, beset by paternity suits and the shrill accusations of House Committee on Un-American Activities, fled America to a small villa in Switzerland. “There are days when I am filled with disgust at the character that circumstances forced me to create,” he told one interviewer, before shuddering. “That dreadful suit of clothes.” He had soured on his public long before that, effectively guillotting the Tramp in his chilly, serial killer picture Monsieur Verdoux, hanging up his bowler hat and cane once and for all in his melancholy flop, Limelight, a film Louvish finds “imbued with post Freudian anxieties about the loss of personality, meaning and the fragility of not only the ego but the Id.”

There’s a fair amount of this in here: clowns dancing on the edge of the abyss, the abyss staring back, that kind of thing. It’s pretty harmless stuff, although you can’t help but feel that Chaplin is getting away scot free: while Louvish ponders such urgent neo-Nietschean questions as who is the master, the maker or the mask, Chaplin is scooting off for a quickie wedding with another of his child brides. “He is the hole into which everything falls” was the assessment of Chaplin’s skills with slapstick by one critic, although he could as easily have been issuing a warning to future biographers. Charming, mercurial, mendacious, Chaplin tends to elude all but the most patient of them; Louvish is far too distracted to manage much more than fleeting glimpses. My favorite comes courtesy of a Times reporter, accompanying Chaplin from Plymouth to London for the premiere of City Lights in 1931:

“He was as exuberant as any of his admirers, a gushing spring of enthusiasm. As the train drew out of the station and the sound of the cheering died away his mood died with it. It was a wholly different man who plunged with anything but easy optimism into a discussion of economics. From its dismal throws he was rescued by the arrival of a tin of Devonshire cream, a long promised treat to which he addressed himself with the eagerness of a schoolboy.”

Everything is there, all of Chaplin’s hunger and restlessness, his acute desire to be taken seriously, his failure to find something more sustaining than the roar of the crowd. "

— my review of Simon Louvish's Chaplin: The Tramp's Odyssey for the Sunday Times (2009)