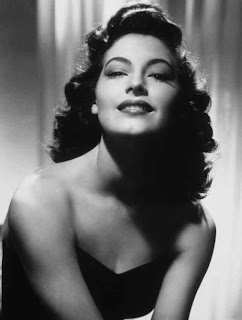 "So here is how an evening out with Ava Gardner used to go. You would arrive at her place in the Hollywood hills and she would be in the pool, naked, or slouching around the apartment, half dressed. Which guy were you? Her 6 O’ Clock or her 8 O’ Clock? Did you pass another guy on the way out by the potted palm? Then you were her 8 O Clock. Fix yourself a drink would you? She had to take a bath. She would finally emerge, looking devastating, muttering something about having lost her diaphragm, and you would go to dinner; everyone would be looking and you would feel the luckiest guy on the planet. Then you would go on to a club, do the rhumba, and get properly drunk; if you were unlucky Sinatra would track you down, and would appear out of nowhere and start screaming Then the evening would really get started. What you did with yourself after that point was entirely up to you.

Sadly, the real miss Gardner is no longer round to hit the town, but Lee Server’s biography Ava Gardner is as close as we will ever get to an evening with the woman herself. Which is fine. Really it is. A book is just…. great. Honestly. Just… dandy. It’s pretty big at 500 plus pages, but there’s a large crowd gathered around this beauty and Server wants to capture them all, from the wounded T Rex that is Sinatra right down to the guy who shot her first screen text for MGM: it consisted simply of Gardner carrying a vase of flowers across a room and placing them on a table. She did it badly too: wooden and awkward and unsure of her vase placement. But, said the test director, “When Ava’s face came on that screen every guy in the room fell in love with her.”

Still, something was missing. It was a good six years before her film career took off and in that time, MGM did what they could to packaged her as standard cheesecake, fresh from the farm — filling in the dimple on her chin, shaking some of the South out of that husky voice of hers, posing her with a tennis racket in her hands, milking cows, feeding chickens; she would sneak back into the publicity office, and timidly peek at the pictures and murmur to herself, “Jeez, from the way people went on so, I thought I was better looking than that”. Your first thought is: this is the Love Goddess who brought Sinatra to his knees? She says “jeez” ? As Ava gives the runaround to the wolves of the MGM executive suit, blushing and giggling demurely as she goes, Server’s book turns into a form of whodunit, as the reader starts to wonder, what on earth happened to this sweet little thing? Where did she go?

Then Mickey Rooney shows up — a squat, priapic, yowling boy king reaching for women like they were icecream sundaes. According to Rooney, Gardner’s body had something “extra” “down there”, although he had to ask her to marry him 25 times to get to first base. Soon, it was Ava who was wandering over to him on the golf course and growling “lets fuck” — she developed “such a technique that no man would ever dominate her in bed again” — and within a year the bashful farm girl was taking a carving knife to Rooney’s sofa suite. Even by Hollywood’s standards, Gardner’s despoilation was so sudden and vertiginous as to take your the breath away, although by the time she hooks up with Howard Hughes this spitfire is giving as good as she gets; when she found out that Hughes was spying on her she took his two front teeth out with a bronze ornament. Sinatra, on the other hand, she would find most responsive to ashtrays.

Needless to say, her film career had found the jolt it was looking for and by the age of 23, with marriage number two under her belt, she was ready to lure Burt Lancaster to his doom in the Killers, where she played a woman in black satin called Kitty, which given what Kitty gets up to, is a bit like calling a ravening wolf Fido. Guided by director Robert Siodmak – “he focussed the camera on her boredom and restlessness” writes Server, Gardner “floats though the film as a kind of dream image, fever-inducing, as much talked about — thought about — as seen”. She was poised for her third marriage (to Sinatra) and for a string of movies in which she “exuded a happy-go-lucky eroticism, like a Vargas girl come to glorious life.”

This is great stuff — as inflamed as any writing about Ava Gardner out to be but also subtly attuned to the mixture of acting technique, direction and miscellaneous voodoo that make up great screen performances. Server gets movie stars, and he gets movies, which is saying something: most film biographies paw so loosely at their subjects as to leave you wondering if their writers have even visited a cinema. But Server is acute when he needs to be and dumbstruck when he needs to be; he reserves his judgments for the films and absolutely refuses to judge the people who make them —an almost perfect blend of qualities in a Hollywood biographer. This is every bit as thrilling as Server’s previous biography of Robert Mitchum, and it says something that when Mitchum and Gardner meet, on the set of My Forbidden Past, the moment has a real charge — these two hard-drinking hellions with their bruised disdain for the acting profession and moments of blind grace. That’s quite a trick for a biographer to pull off — to both immerse himself in his subjects, and yet make them utterly his own at the same time. I can’t wait to find out who he’s doing next."

— my review of Lee Server's Ava Gardner for the Sunday Times, 2006