My afternoon with Mr Brainwash 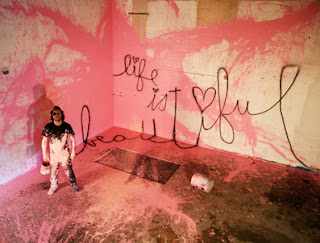 'It’s not hard to see what Banksy saw in this chatty bamboozler, with his shambolic energy, paint-spattered jeans, showstopping displays of humility and racoonish pallor. He is a dead ringer for the young Stanley Kubrick — or maybe a Gallic John Belushi, porkpie hat pushed back jauntily on his head, his heavy-lidded eyes containing just a hint of panic, as if expecting police to arrive any moment and take him away. “A truck could hit me tomorrow,” he says. “But I am unstoppable. I ’ave such strength in me. Banksy knew this. That is why he chose me. Not Damien ’irst. He chose me.” We draw up in front of his portrait of Banksy depicting the artist as a hooded monkey.

“Whatever. I don’t put it. I would describe ’im as a guy who is taking off a mask and there is another mask. He takes off the second one and there is a third one . . .”

The person he most reminds you of is Dennis Hopper’s nutty photographer in Apocalypse Now, losing himself in rhapsodic paens to the genius of Colonel Kurtz'

— from my interview with Mr Brainwash in The Times