The military take on The Hurt Locker 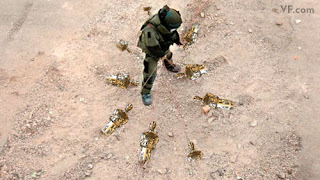 'As a former Marine infantryman I can say that I found "The Hurt Locker" to be generally accurate in terms of military culture, all the way down to stupid drunken wrestling matches in the middle of the night. More, I know some people (US Army) who are in Iraq right now, and they love the movie, considering it the most accurate depiction of what it's like over there. Yes, there are things in the movie that don't make sense in terms of actual practice (e.g. the guys never call for backup or close air support - the scene at the desert bunker would have been the perfect opportunity for that). Yes, the lead character is a loose cannon who you imagine being busted, NJP'd (non judicial punishment), and reassigned. But just because these things are improbable doesn't mean they are impossible.' — The Daily Dish

I'm agnostic on this kind of thing. Nobody forced American soldiers to play Russian roulette in Vietnam war, either, but that doesn't mean I think any less of The Deerhunter. Still, it's good to know.