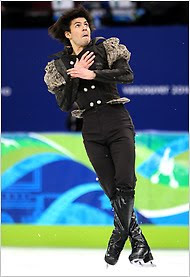 So I'm 42 and I just found out a new fact about myself: I really like Olympic figure skating.Who knew? In particular, I was just utterly wowed by the pirhouetting Swiss champion Stephane Lambiel (left), who reminded me of the featherweight boxer Prince Naseem Hamed in his dedication to what the old grumps in Strictly Ballroom call "crowd-pleasing moves." It was crazy, cocky, sprezzatura all the way: Rufus Wainwright flounces, Freddy Mercury struts, the double-jointedness of that master moonwalker in the sky, Michael Jackson. Lambiel seemed to my untrained eye to be competing in a different sport to his competors altogether, in much the same way that Prince Naseem used to be boxing in a different dimension. If you could do that — keep your arms down, dance around the ring, point to your chin, then knock out your opponent with a single snaking blow to his — then why didn't everyone do it? That's how I felt about Lambiel. If that's possible — tail-feather shimmies, full-bore spins, little airborne canters — then why would you want to watch anything else? One thing, though, about the ice-skating in general: all the competitors need to work hard to eliminate the bit of their routine where they fall flat on their arses. Seriously. You'd think at this level they'd have ironed out such beginner's lapses. I'd have thought it would all be about hair-splitting perfection, invisible to the naked eye stuff, outleaping the last guys leap by an inch, outspinning the next guy's spin by a 0.005mph. Instead it's easy to spot who's just loused up: its guy on his arse. The winner is the guy not on his arse. It's too simple. Who needs judges for that?