Reputations through the looking glass 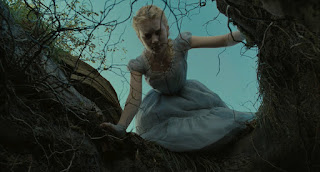 "Quite like what one would expect from such a match of filmmaker and material and also something less, this Alice in Wonderland has its moments of delight, humor and bedazzlement. But it also becomes more ordinary as it goes along, building to a generic battle climax similar to any number of others in CGI-heavy movies of the past few years... It all seemed like such a natural fit -- Burton and Lewis Carroll, Depp as the key component in fiction's most eccentric tea party..." — Todd McCarthy, Variety

When are people going to stop being disappointed by Tim Burton? Every time he comes out with a movie, people line up to say "wow, I expected better. It seemed like such a good fit: 'Burton plus X'. The visual possibilities seem endless, but that's all this movie is: a triumph of art direction over direction." They've said it about every movie of his since Batman. It's not like there's this vast back-catalogue of excellence from which the new film is a shrugging departure. The way I remember it, he peaked with Edward Scissorhands, burned out with Batman and has turned out movies of a consistently average texture (great visuals, skimpy characters, plot) ever since. Either Burton has cornered the market in audience memory wipes, or else people need to readjust their expectations of how good he is exactly. His problem is the exact opposite of Woody Allen's: every film of Allen's since Bullets Over Broadway has been judged a "return to form", even though he was supposed to have returned to the form the last film he made. Or if not that one then the one before that. He just can't stop returning to form. His form is forever being lost so that it can be returned to again. With Burton it's "a disappointment from a master" even though the master has been disappointing us for the best part of two decades. Maybe this is as good as he gets. I'm reminded of a comment Martin Scorsese made about critics who find his recent films unworthy of his reputation as the World's Greatest Filmmaker. "I'm doing the best I can," he said plaintively, meaning: get your expectations off my back.