The Best of Maggie Gyllenhaal: Sherrybaby 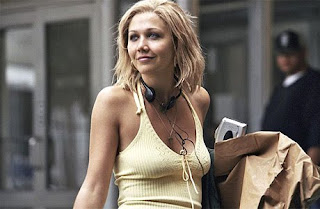 We've seen a lot of female alcoholic/addicts over the last ten years. Of all of them — Tilda Swinton in Julia, Anna Hathaway in Rachael Getting Married, Jennifer Connelly in House of Sand and Fog — Gyllenhaal gets the top prize: drunkus emeritus. She gets the ambivalence, the indignity of Sherry Swanson, returning home to New Jersey after three years in prison, pissed at the things she is desperate to have back, ready to throw it all away in single flash of anger. Gyllenhaal understands hunger, which makes her perfect at the slutty end of the spectrum. In Secretary, and Happy Endings, she plays women with so few boundaries they're almost skinless — they're turned on by air. She's a cat in sunlight. No actress her age could have fallen in love with Jeff Bridges in Crazy Heart and put the two of them on such an equal footing. And she is simply formidable in World Trade Centre. One day, she'll get her Sally Field moment: enjoy her now while she's at her best. She's one of my favorite American actresses at the moment.