The Sun and the fine art of making stuff up 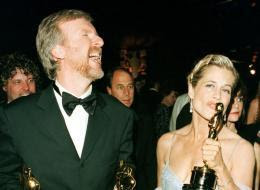 I'd almost forgotten the sound of Sun-speak. But then The Huffington Post linked to a Sun interview with Linda Hamilton, in which she is claimed to have said the following:—

* "Titanic was the mistress he left me for. He was the kind of man who really would rather be at work with the mistress than at home with the wife."

* "The woman he can't get is always his dream girl. Work and women go hand in hand for Jimbo, and I should know."

* "Then he told the crew that he'd made me work up that rage to get a better performance from me. Bull! So the apology didn't mean a thing. I thought: 'You creep!'"

* "He used to say to me: 'Anybody can be a father or a husband. There are only five people in the world who can do what I do, and I'm going for that.'"

Of these, only the last feels like it was uttered by an actual live human being. "Titanic was the mistress he left me for"? Who speaks in headlines like that? And then helpfully continues the metaphor "the kind of man who would rather be at work with the mistress". Nobody does. Its pure fabrication. As is "work and women go hand in hand for Jimbo, and I should know." It's the redundant over-emphasis ("And I should know") that's the give away her, as is the helpful bit of explanation in the next quote ("so the apology didn't mean a thing") to help out the Sun's dimwitted readers with the point of the story. Ah, England, I do miss her so. Fish and chips. Marmite on toast. Tabloid newspapers filled with made-up twaddle.