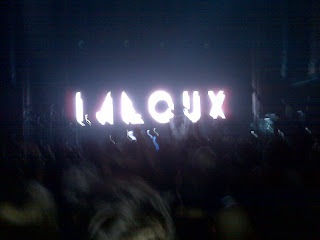 En route to the La Roux concert at Webster Hall last night, Kate tried to convince me that she had once stage-dived.

Once there, I regaled her with the accumulated musical wisdom culled from a childhood spent listening entirely to Depeche Mode records, with occasional breaks for the Yellow Magic Orchstra and Kraftwerk. When a huge set of Simmons drums were wheel on stage, I pointed them out, delivering a potted history of the Simmons drum in pop music, explaining how the drum worked (drooping sine wave + white noise), where Kate might have heard them (Thomas Dolby's She Blinded Me With Science, Naked Eye's cover of Always Something There to Remind me) and was just about to deliver my pitch perfect rendition of what a Simmons drum actually sounded like when Elly Jackson walked on stage and the place went gaga. The concert was great, much better than I expected, just an hour long, and each song only three or four minutes tops. They sounded brighter and punchier live than they do on record (which wouldn't be hard: the production values of the records are very My-Brother-And-His-TR808.) Best of all was Jackson herself, a tiny little thing in slacks and a gold lame jacket, her quiff piled extra high for the occasion, lit from behind by banks of LED lights, she looked like a cross between David Bowie and an Anime cartoon character, with these cute little rockabilly dance moves that look they've only just left the bedroom. She's got a gift for iconic stagecraft, frequently posing in side-angle bent over her microphone, an elfin Elvis silhouetted by a thousand points of light. Dazzling.

My interview with Elly Jackson in New York magazine here