Come back home to us, Quentin, come home 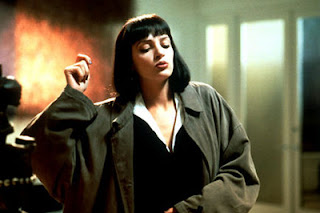 'He is discoursing and commenting on and jumping off from past cinema. With Inglourious Basterds, masterfully, with care and affection, he dreams up a new universe that has more to do with World War II movies than the real thing.... you watch it from a distance, appreciating the references and the masterful mise-en-scene, inspired by Sergio Leone spaghetti westerns, the French New Wave and The Guns of Navarone, among other things  ... In that sense, he’s very much like French New Wave critic-turned-filmmaker Jean-Luc Godard, who commented in his films on other movies as well as pop culture.'— Anne Thompson

When I think about the reasons and ways in which Tarantino has gome unstuck, this seems as good a place to start as any: the way critics keep reducing everything in his work to a list of movie references. I get why they do it. They're film critics. That's what they do. Compare movies to other movies in a way which suggest someone casually flipping through the massive rolodex inside their head. But the Frankenstein's monster they've constructed — Tarantino as patchwork man made up from the tissue of a thousand other movies — is false. Worse: critics have repeated it for so long that Tarantino has come to believe it himself. You go back to Reservoir Dogs and Pulp Fiction today and it's amazing how rooted they feel in time and place — specifically Los Angeles in the early nineties. Pulp Fiction one of the great movies about Los Angeles — a low-fi, acrylic version of Chinatown. Its spiraling, corkscrewing plot could take place in no other city. For all his movie-ness, Tarantino's great innovation, it seems to me, was to take movie situations — a heist, a hold-up, a hit job — and then freak them out by hurling a big chunk of reality into their laps. He took movie set-ups and filled them with stoners and slackers and burger pigs and video clerks and then sat back to see what would sparks flew. Imagine a hit man discoursing on a burger. Say a boxer ran into a crime kingpin on the street, just ran into him, like you do when you're down the Beverly centre... The further Tarantino strays from this reality — the far east in Kill Bill, occupied Rance in Inglorious Basterds — the worse his movies have gotten. The solution is simple enough: he needs to stop globe-trotting and return home.