This man is why the internet was invented 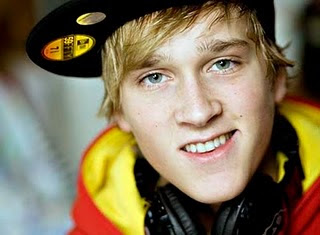 If this kid was American or English I would be compelled to hate him, or at least to say I hated him while secretly liking his songs. He's Norwegian, and came to fame in his home country through Norway's answer to American Idol, but ended up losing to bloody Didrik Solli-Tangen of all people. You see? If any of this had happened in a country where I live, or used to live, or ever had any intention of living, I'd have to hate this song, which I would have heard played week after week on TV and radio until I could bear it no more. And I'd almost certainly be sick of that face too, with its stupid grin and silly baseball cap. But the fact is I've never seen his face before and without the cap he's probably a sweet kid. I've never heard his song before and it's absolutely terrific, worthy of Aha, the sort of thing destined to be number one for 7 weeks until everyone would rather eat their own arm than hear it again. Except those of us who can just drop in, via the internet, and appreciate it for what it is, which is a cool little pop song. You can even glean some extra cred for being interested in the music of another country. Even Britney Spears appears intriguingly exotic to someone, somewhere in the world. It's like dropping into an alternative universe where cultural boredom doesn't exist and nobody can ever judge you for liking the music you like. Just the way the real world is supposed to be but isn't. Isn't the internet great?