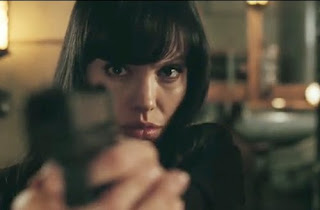 "You are my greatest creation," whispers a Soviet spymaster to Angelina Jolie in Phillip Noyce's Salt. Wearing a babushka hat, her profile pooled with chalky light from the setting sun, Jolie allows herself only the slightest of half smiles at the compliment, as proud and inscrutable a Soviet cosmonaut posing for a postage stamp. Maybe only Jolie could have brought off the role of Evelyn Salt, a CIA officer who may or may not be Russian mole, and if she is a Russian mole, who may or may not be a rogue double-agent, fooling both sides. The movie is way more incoherent than I'd been led to expect — for long stretches you simply have no clue who it is your watching, or whether you are rooting for her or not — but Jolie is above psychology these days. She's an enthrallingly inhuman performer, a fame-enamelled Goddess for whom such matters as motivation are mere mortal concerns, specks bouncing off her force-field of sheer beauteousness, like those nukes going splat against the alien ships in Independence Day. With each film, she looks more and more like a cgi version of herself, her lips and cheek bones sculpted, but not in a way that conveys weight; when Liev Schreiber picks her up and throws her across the room, she could be made of styrofoam, much like the film itself, which is full of so many false bottoms, it's weightless. But it hangs together purely as a star vehicle: there's one shot of Jolie walking barefoot across the tarmac in a light grey suit that is a dead ringer for the one worn by Eve Marie Saint in North by Northwest; and there's an assassination that takes place during a state funeral in which Jolie calmly shoots out the organ, bringing cacophony down upon the congregants heads, like Satan himself. I'm a sucker for these kind of loose-the-dogs-of-chaos moments — there's another one later, involving the dispersal of grenades in a ship, two aft, two fore, one down a flight of stairs for good luck. The explosions plume around her and Jolie keeps walking, with a look of pure contempt on her face, as if storming the office of one of the tabloids. B-