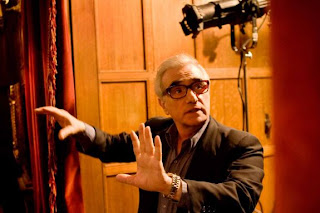 Martin Scorsese’s new project, “The Invention of Hugo Cabret,” a 3-D children’s movie, is an adaptation of Brian Selznick’s novel, set in Paris the nineteen-thirties, about an orphan who lives in the Montparnasse station and encounters a toy seller who turns out to be the movie pioneer and original special-effects wizard Georges Méliès (played by Ben Kingsley). Last week, the crew shot in the main lecture hall of the Sorbonne, which he turned into an early movie theatre; at a nearby library (which was repainted); and in the Ninth Arrondissement (about which, more in a moment). A painter says that he noted that the filmmaker was concentrating on twenty or so monitors, needed to supervise the 3-D, and that two cameras continuously film the scenes. Scorsese will shoot, in the Athénée Theatre, a levitation trick performed by the famous magician Harry Houdini…. It’s a crucial scene—the director checked out the location three separate times." — The New Yorker

This may the the first Scorsese movie in a long time I've actually been looking forward to, for the following reasons:— 1) No Di Caprio. 2) No mobsters. 3) Scorsese is an unsentimental director of child actors. He once made a great movie about a a mother and her son, featuring a very young Jodie Foster, called Alice Doesn't Live Here Anymore. It wasn't his choice: Ellen Burstyn got him hired on the back of Mean Streets. The male-female pugilism 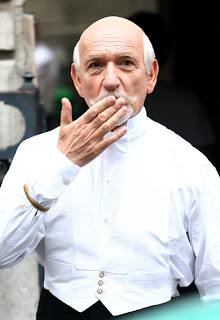 aside, it couldn't be less "Scorsese"-like, but he found a delightful skittering slapstick rhythm between mother and son that I have never seen bettered on film (although the father-daughter wisecracking in Paper Moon comes close). I always felt that film hinted at the wide-ranging, ambidextrous career for Scorsese that then resolutely failed to happen. Then he got married to the mob and that was that. 4) Ben Kingsley. 5) Paris. Not only that but Melies' Paris. 6) Kids in 3-D! Directors only self-cancel when they adapt their dream projects or books by authors from whom they were separated at birth — Cronenberg's Crash, Fincher's Fight Club, Spielberg's Peter Pan, De Palm's James Ellroy. You get movies in total agreement with themselves, when what you want an argument, a creative switchback, self-wrong-footing. The best book a director can tackle is the one nobody would imagine him doing in a million years: The Godfather, Jaws, LA Confidential. Regardless of the outcome, it's the healthiest artistic choice Scorsese has made since Kundun. 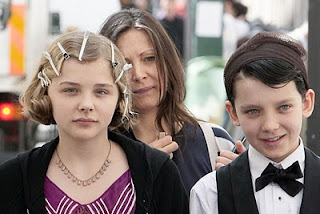