How American are American movies? 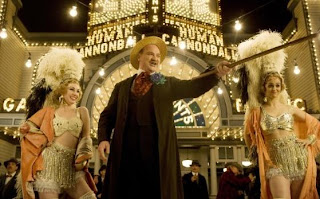 "The rising clout of international audiences is a sea change for Hollywood. Decades ago, a movie's foreign box office barely registered with studio executives. Now, foreign ticket sales represent nearly 68% of the roughly $32 billion global film market, up from roughly 58% a decade ago, according to Screen Digest Cinema Intelligence Service. The result is that one of the most American of products is now being retooled to suit foreign tastes. Studios have begun to cast foreign actors in American-themed blockbusters like "G.I. Joe." Scripts are being rewritten to lure global audiences. And studios are cutting back on standard Hollywood fare like romantic comedies because foreign movie-goers often don't find American jokes all that funny." — WSJ

I've been saying this for years, most recently for New York magazine:—

Things began to change with Jaws and Star Wars, summer blockbusters that gobbled up 40 percent of their revenue overseas. But it wasn’t until after the fall of the Berlin Wall, and the opening up of Asia, that things began to pick up speed. Jurassic Park made over 60 percent of its money overseas, and in 1994, Hollywood’s overseas revenues outstripped its domestic take for the first time. Accepting his Golden Globes for Avatar last month, James Cameron observed two truisms: (1) even the HMFIC serves as second in command to a full bladder, and (2) “What we do is we make entertainment for a global audience.” Cameron's film has made an astonishing 70 percent of its money abroad. Hollywood is no longer America's film industry; it is the world's TV set.

French fears about Jurassic Park constituting the second invasion of Paris had it backward: it was the Trojan horse by which foreign markets bedazzled studio execs. While we all wait for the premiere of the Martin Scorsese-directed Boardwalk Empire, the new HBO series about the beginning of the casino era in Atlantic City during the 1920s, ask yourself this: didn't Hollywood used to do this? I mean, historical national epics of the Once Upon a Time in America variety. They did, of course, but with cinemas block-booked with Iron Man, Spiderman and Thor — films gauranted to go down a bomb abroad — the American historical drama has been left largely to HBO: Deadwood, John Adams, Band of Brothers, Boardwalk Empire. The channel is not just a breakaway republic of Hollywood, it's become our national historian.