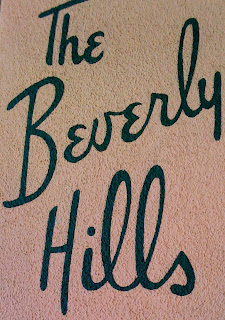 Sorry posting has been a little light of late. I'm in LA, with a whole series of interviews banked up in front of me, like jet planes waiting to land: Jeremy Renner, Raquel Welch*, Mark Ruffalo, Philip Roth... Actually, the world's unrivalled chronicler of sexual satryiasis, Jewish diasporism and handjobs is not sunning himself poolside at the Standard, he is in Connecticut, waiting for me like a crocodile in mud, ready to pounce on the slightest gap in my knowledge of his oeuvre, before demolishing me with a single Cyclopic stare through his eyebrows that sends me scuttling back to Brooklyn. I'm cramming like I haven't since my final year at university, when I read so much I lost the ability to track moving objects, my head bobbing around like a baby's. My curriculum is all shot, however. Sabbath's Theatre.... Ms Welsh's autobiography Beyond The Cleavage.... Indignation..... the making of Fantastic Voyage..... The Counterlife.... fur-lined push-up bras, and.... actually fur-lined push-up bras strike me as a very Rothian invention, although I could never see him signing off on a title like Beyond the Cleavage. The writer of The Breast, who has long stood positioned beneath the balcon formidable of his female characters, like Romeo before Juliet, would never have stood for such a thing. 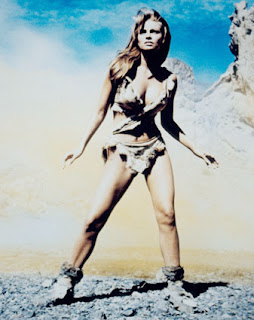 Miss Welch told me the story behind that poster:—

"I thought: okay no dialogue, what can I do? I thought the only way I can survive this thing is if I don’t just run around but keep in mind from all my dance training. I overdid it a couple of times, ridiculously, but I thought if you whenever you're moving if you have a purpose and use your athleticism and your ten years of classical ballet training then it's not going to just be you bumbling through the scenery. I'm going to movie with authority, I'm going to move with grace and athleticism. And I hope that’s going to give my character something, even though I'm nor speaking. It's your only hope to survive. So I did that. That was actually a jazz move. I just struck it without thinking.”