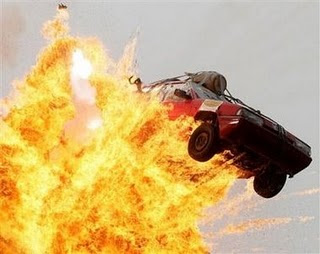 "Say what you will about Michael Bay, but he knows how to orchestrate chaos. Too often I see people discounting the amount of effort, cinematic craftsmanship and stylistic flair that’s required to successfully pull off insane action beats like the ones Bay produces—and from budding filmmakers no less. The ability to create mass bouts of sensationally-staged carnage is not a talent that many filmmakers possess, and Nolan is proof of that. Despite finding a rather brilliant way to engage audiences in Inception’s action through clever storytelling, it’s clear that Nolan has not yet gotten a handle on how to stage action set pieces such as shootouts and chases. If Nolan has been attempting to cull from the Michael Bay school of action-directing—a possibility that seems almost blatantly apparent now that his affinity for Bay’s work has been made public—he’s still got a lot to learn" — / Film

No, no, no, no, no, no, no. This is so off the mark it's not even wrong, as the physicist said to his student. "Despite finding a rather brilliant way to engage audiences in Inception’s action through clever storytelling, it’s clear that Nolan has not yet gotten a handle on how to stage action set pieces such as shootouts and chases." Does the writer think that car chases and shootouts do not require storytelling skills? If he does he merely echoes a widely-held belief that conflates "action sequence" with "noisy, violent stuff happening." Second rate filmmakers have a vested in interest in conflating the two: noisy violent stuff is a lot easier to shoot than an an action sequence proper. The likes of Bay and Tony Scott, and Brett Ratner would love if we forgot about the narrative skills required to tell a story through action properly. Nolan has nothing to learn from Bay. Still less is there a "Michael Bay school of action-directing". Bay does not shoot action. He looses chaos — a very different thing.

* An occasional series devoted to statements that are not just untrue, but complete inversions of the truth — flip them through 180 degrees and you would have a wholly true statement.