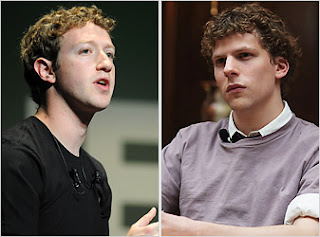 The New York Times' film reporter is shocked, shocked I tell you, to find out that the makers of The Social Network might have strayed from the path of strict, honest-to-goodness, on-your-mother's life truth in their telling of the Facebook story.

"The movie deals heavily with themes familiar to Hollywood, like friendship and betrayal, but makes little effort to explain Silicon Valley or the Facebook phenomenon... The film is also sprinkled with scenes of extravagant parties, and it is not clear how authentic they are. As of this week, Mr. Rudin said, one remaining question was to what extent the finished film would include a scene that depicted Sean Parker, the Napster co-founder who was heavily involved with Facebook’s early history, delivering his dialogue while a pair of teenage girls offer partygoers lines of cocaine from bared breasts"

So the filmmakers chose bare breasts and cocaine over exposition about how computer chips work? How utterly confounding. So unlike those nice boys who run Hollywood, too.