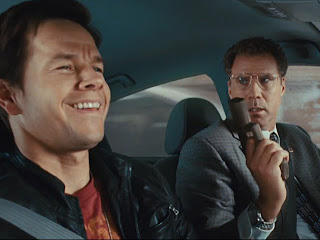 According to the NY Post's Kyle Smith, Will Ferrell has a "message on capitalism" that "interrupts, then takes over, then finally kills" his new cop comedy, The Other Guys.

"Ferrell and McKay introduce an investment banker (Steve Coogan) who represents Evil Capitalism and is even shown shaking hands with George W. Bush (whom Ferrell has said he would refuse to meet with, on principle). The Coogan character not only isn’t funny, but he becomes a bulletin board for Ferrell and McKay to post all of their bitter, half-understood notions about What’s Wrong With Wall Street. Like many idiots in the popular press, they are convinced that the Bernie Madoff scandal is somehow indicative of the way modern Wall Street crony capitalism works (when in fact it was a simple Ponzi scheme that could have happened anytime and has been happening for a century — but is relatively rare simply because of the inevitability of getting caught). The more the movie yammers on about pension schemes and misappropriated funds, the more you check your watch.... it is (for long stretches in the second half) simply a screechy, speechy, huffing, puffing bore."

I love how the right have turned into the left when it comes to movies. First they attack Avatar on the grounds that it is mean to forestry developers, now they go after a Will Ferrell movie because it hurts the feelings of bankers. For this kind of Gradgrindian humorlessness, you used to have to look up ornery old Marxists with essays tucked under their arm entitled Totally Recalling Arnold: Mimicry and Mimesis in the Absent(ed) Future, but now the right are getting in on all the bah-humbugging for themselves, complete with buttonholing parentheses and top-volume adjectives. Screechy, huffing, puffing, yammering. It's interesting what mirrors such adjectival splurges always turn out to be.