Time for Brits to reclaim the American revolution 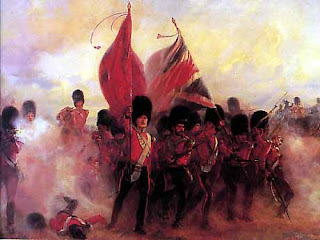 “This is a moment, quite honestly, that I think we reclaim the civil rights movement.”— Glenn Beck

“I hope that Dr. King would be so proud of us, as his niece Dr. Alveda King is very proud as a participant in this rally. This is sacred ground where we feel his spirit and can appreciate all of his efforts. He who so believed in equality and may we live up to his challenge.” — Sarah Palin

I'm not going to beat around the bush: we Brits can't help but feel a little excluded by your July 4th celebrations. There it is. There's not really much for an Englishman to do, except creep around the place looking as inoffensive as possible. It's not like we even count as a minority; we're the original oppressors, the guys you all came here to get away from, the gatecrashers of the American republic — the psycho ex-girlfriends, the bunny-boilers, the Klingons, the one who didn't get the memo. Don't think it hasn't hurt. Don't think we haven't occasionally wondered if maybe the tiniest bit of gratitude might be in order. Oppression is a two-way street, you know! You couldn't have done it without us! And then the other day I happened to be watching the cherubic Glenn Beck on telly — we do so approve of the way that man loves his tea parties — and wouldn't you know it we had a brain-wave. Are you ready? Here goes. We think it's high time the British reclaimed the American Revolution. It's a corker, no? Oh but I know what you're thinking. "But you can't do that!" comes the cry. "The American revolution threw off the irksome yoke of tyranny put in place by you bloodless bastards!" To which I say: Don't be so oppositional in your thinking. Nobody likes a sourpuss. And: mind your language. All we're saying is that the declaration of independence cuts both ways. You think we weren't willing you people towards standing on your own two feet you lazy little blighters? That we weren't tired of collecting all those taxes? (Frankly we were a little amazed it took you so long to figure it out. Taxation without representation? Our way of gently reminding you peeps that maybe, just maybe, the time had come to come to stand on your own two feet, toddle off and find your own system of taxation!) You've read Co-Dependent No More, Melody Beattie's shining beacon of a book which has shown millions of readers, through personal examples and exercises, how controlling others forces them to lose sight of their own needs and happiness? You haven't? Well you should. A marvellous book — if only Melody had published it a few centuries earlier, we'd all have been spared a lot of blood, sweat, tears and lost tea. But it's okay. Let's not go there. The fact is, we were as delighted as any parent when you finally got the picture and shoved off, you little bleeders! It's been great watching you little darlings with your fireworks and your flags and your barbeques every year. So sweet. Hard to stop a tiny tremble in the old stiff upper. But enough's enough. As wonderful as it is to see you finally kick off the training wheels and ride on your little lonesome, the time has come to let old Auntie Britain back into your life! You know you want us, dahlinks! Don't you shake your head like that! Oh you are a one. Let me be clear what we're not asking. We're not asking for control of your ports. We're not asking that you hand over your hard-earned tax dollars (the amount you skinflints pay? It wouldn't keep the Queen in dog food for a week!). No. We'd just like to organise a march or two down the middle of your state capital on July 4th every year. Just a few million Brits, plus our man-servants, all waving flags and banners celebrating George Washington and his secret BFF King George III, the new figurehead of all things revolutionary. We'd sing God Save the King — you can join in the chorus, if you can still remember it — and serve bangers and mash and drink tea. It'll all be so jolly. Just like old times. Except reversed. Now we'd be your guests! Don't bother to let us know what you think, we're already on our way! Here's to the Jolly Old American Revolution, what-what! Long live the King! Toodle-oo! Pip Pip!