Is Jon Hamm's handsomeness an axiom yet? 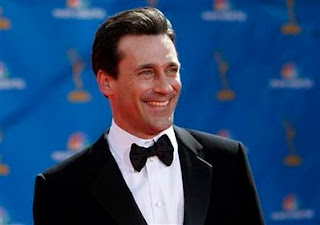 Watching him cavort and shimmy, wiggle and jive in the intro dance number at last night's Emmy Awards, his hair bouncing like a Collie's mane, I had fresh reason to ponder the entirely benign, almost freakish gift to the nation that is Jon Hamm's handsomeness. If Roland Barthes were still around he would probably call him an "axiom". How trained Hollywood's beautiful people are, these days, to shove their head into a paper bag at every available opportunity — Johnny Depp, Charlize Theron, Brad Pitt, to name just a few of the worst offenders. Hamm — for whose nascant movie-stardom last night's Emmy's were practically a coming-out ball — is a glorious throwback to the time when stars used to enjoy being looked at, soaking up the limelight the way plants seek out the light, photosynthesising their fame and sending it back out into the ether, redoubled. Today's stars are no less glued to the mirror than they used to be, but they're much more embarrassed by the fact, affecting a matte, brushed-steel indifference to their fame, taking aerosal cans to their own image in extravagant acts of self-graffiti in role after role. It's the sack-cloth-and-ashes approach to movie glamour — shame-faced, apologetic. Maybe it's no surprise that the two male actors who body-swerved this tendency — George Clooney and Jon Hamm — have also come to their careers late, and through TV. Theirs is the seasoned humility that comes from the long, hard slog towards the limelight; which means they still retain a connection to the silken, long-distance allure that movie star glamor has on an audience. Until recently, they were sat there with us in the cheap seats. They know what fame looks like from the outside, and having finally made it to the inside, they're not about to try and booby trap the audience's yearning in a fit of reverse vanity. They will stand there like men, godammit, lungs full, feet planted on the ground, backs braced, soaking up the attention like Kirk Douglas or Burt Lansaster* in their irradiant prime.

* See this impression of Lancaster which Alec Baldwin did on Letterman recently. It's a thing of great beauty, well worth enduring the 20 seconds of commercial for 'Outback' restaurants.