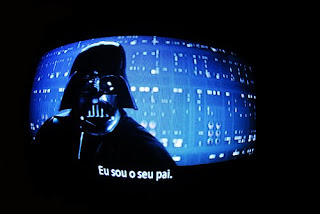 It didn't help that I'd been unable to contain myself and read Donald Glut's novelisation of the film before it came out. I can remember reaching the end and feeling utterly hollowed out by the words "I am your Father," disgusted with myself for my lack of patience — that I had thrown away the experience of watching the movie cold for this soapishly banal revelation. That kind of thing happened on Dallas or Dynasty, not Star Wars. The pre-ordination felt claustrophobic — a terrible rescinding of the offer of adventure contained in the first film. For there, the droids had not chosen Luke; they had been looking for Kenobi, and Luke was simply nearby. That kind of happy accident is how we meet the heroes of a hundred fairytales and it whispered with promise. It said that even though you lived in the back -nd of nowhere and knew exactly what Luke talks about when he describes Tatooine as being the furthest from "the bright centre of the universe," you too might, under the right circumstances, be exactly the kind of 10-year-old to get invited along for the ride. No more. For Luke was no longer a farmboy, but the son of a Lord; the saga had been looking for him all along; the Force was now merely a matter of good breeding. I would later read Pauline Kael's point that the Star Wars saga got less American and more European as it went along, and agree with her — I hadn't coughed up pocket money to travel to a galaxy far, far away only to get there and find a red rope across the door: blue bloods only. Snobbery about one's pedigree I could get back home. Not that I saw it in those terms back then. I knew only that it felt profoundly wrong — the hasty elaboration and retrospective self-justification of a bad liar. That's when Lucas lost me. That's when I stopped thinking Star Wars the most important thing that had ever happened to me; and my future as a fanboy fluttered out of existence. Simple loyalty wasn't going to suffice.