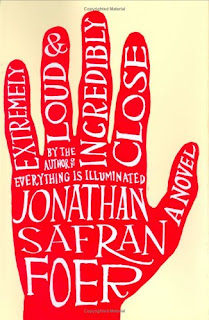 Paramount and Warner Bros. are set to partner on Jonathan Safran Foer’s 2005 Extremely Loud & Incredibly Close: A Novel, with Stephen Daldry to direct two Oscar-winners, Sandra Bullock and Tom Hanks. The deals are not yet closed, and it has not been determined which studio will take domestic or foreign (Warners grabbed rights to the book, then brought in Rudin and Paramount). Bullock and Hanks will take on the parents of a brainy nine-year-old vegan/scientist/artist/pacifist who plays a tambourine (recalling the drummer-hero of Gunther Grass’s The Tin Drum). He searches for a lock that matches a mysterious key left behind by his father, who died the year before in the North Tower on September 11, 2001. His father’s parents also recount how they met and married and lived through World War II.

Look, it's touching that Hollywood puts such store in literary novels — seriously, good stories are hard to come by — which is why it's so mystifying that that any self-respecting movie mogul would make a beeline for the effete fabulism of Jonathan Safron Faer, whose name alone recalls several old Steve Martin jokes. How many times do these boneheads need to crack their skulls on the latest NYT bestseller to remember: fabulism, or magic realism, or anything so much as resembling the cute, red-headed offspring of the two, is narrative kryptonite at the movies. Oscar and Lucinda, anyone? Captain Corelli's Mandolin? Everything Is Illuminated? Love in the Time of Cholera? House of the Spirits? Like Water for Chocolate? The Green Mile? Oy. Stay away from the Mysterious Keys! Go for the storytellers, the thriller-writers, the page turners, the plot-drivers, the narrative hard-hats, not the writers with the oblique, come-hither prose styles whose carpet-ride peregrinations and Miracle-Gro family trees aim to evoke the creamy swirls they find in their coffee in the morning.