One reason I don't go to the theatre 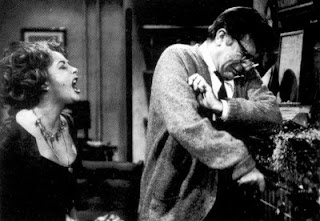 "I think that people, in circumstances of stress, can behave like swine, and that this, indeed, is not only a fit subject, but the only subject, of drama" — David Mamet

People can, under certain circumstances, behave like swine, and yet this is the only subject of drama. Maybe I'm too interested in non-swinish behaviour to be a true fan of theatre. A limited number of characters. In a confined space. In a contracted time frame. The easiest way you have to make that interesting is to endow the characters with more wounding tongues than they ordinarily might possess, amp up the swinishness, bringing long-simmering conflicts out into the open, and so on.... — all the stuff that feels most put-on about the theatre. Mamet isn't just talking about an innate word-view he happens to have. Every playwright seems to hails from the School of Articulate Resentment. His pessimism is formalism in disguise.