The End Of Civilization As We Know It, in three easy-to-remember steps 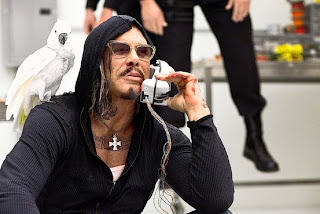 In a millennium that has thus far produced precious few motion pictures in the same class as "The Godfather," "Jurassic Park," "Casablanca," "Gone with the Wind," "My Fair Lady" and "The Matrix," there is a knee-jerk tendency to throw up one's hands and moan that the current year is the worst in the history of motion pictures. But 2010 very possibly is the worst year in the history of motion pictures. Where once there was "Robin Hood: Prince of Thieves," there is now "Robin Hood," prince of duds. Where once we could look forward to "Breakfast at Tiffany's" and "The Last of the Mohicans," we can now look forward to "Dinner for Schmucks" and "The Last Airbender."

You see? It's a neat trick once you get the hang of it, endlessly repeatable. Instead of Citizen Kane... Twilight: Eclipse. In place of Apocalypse Now... Jonah Hex. According to Queenan, what has been missing from this year's films is one of those alt-Hollywood sleepers in the vein of Crazy-Heart-My-Big-Fat-Greek-Wedding-Slumdog-Millionaire-Amélie-The Wrestler-The-Hurt-Locker. Oh, that kind of movie.

2010 doesn't have one of these movies. "The Kids Are All Right," arguably the most heartwarming lesbian romantic comedy ever, is trying to fill that slot, but whatever its merits, it's no "Sideways," no "March of the Penguins."

This is undeniable. The Kids Are Alright is no March of the Penguins. Or Sideways. The last time I looked, it was no Snow White, The Wild Bunch or Full Metal Jacket, either. All it had was a couple of lesbians and some lousy kids. No penguins, no unpublished authors, no princesses, no cowboys, no full-scale representation of the Vietnam war staged at the Beckton gasworks in East London. None of that. Just lesbians and kids, lesbians and kids, like they're the centre of the goddamn universe all of a sudden. What a lousy stinkin' year for the movies it is.