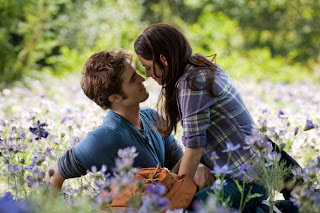 Twilight: Eclipse begins with an offer of marriage in a field of bluebells very similar to the one in Jane Campion’s Bright Star. “Marry me,” says Edward (Robert Pattinson), “I cant. I have to be back by four.” As reasons to refuse your hand in marriage, this is not good, but Edward takes it on the beautifully cleft chin. He is a vampire, after all, and knows a thing or two about ambivalence, having spent the best part of the previous two movies going back and forth as to whether he should plunge his teeth into the neck of his beloved Bella, thus uniting them in eternal damnation. Now he’s back, even paler than before, as if in severe need of a top-up, but still refusing to take a bite, like a rockstar in recovery. “Its too dangerous,” he says. The Twilight Series may be the only vampire saga in film history where the vampires fear the virgins. This leaves the door open to the werewolf Jacob (Taylor Lautner), a caramel-colored hunk with a habit of showing up with no shirt, his thumbs in his pockets, to a surge of alt rock on the soundtrack. “Doesn’t he own a shirt?” snipes Edward, and it’s the first sign that the director, David Slade, intends to inject some fun back into the proceedings after the dire second film, in which Edward absconded from the action in a fit of high mindedness, Bella fell into a terrific mope and it took Lautner an eternity to reveal his abs. Lesson learned: at one point in the new movie he even appears shirtless on a mountain top, in a snowstorm, like a cross between Friedrich Nietzsche and a Chippendale. The plot turns on a vicious vampire army gathering in Seattle — my how that place took a turn for the worse after Tom Hanks and Meg Ryan left town! These guys are instantly recognizable by their yellow contact lenses, deathly pallor and the kind of truly ghastly hairdo it takes a team of ten highly paid Hollywood stylists to put together. They mean business. Or as someone helpfully points out, “Something terrible is coming and we must all be ready” — presumably a paraphrase of the line used by everyone’s agents upon receipt of the script, which contains enough howlers to keep a pack of werewolves occupied for a month, including “I was just a puppet and she was pulling the strings” and — my favorite — “It doesn’t have to be goodbye.” Rumor had it that Twilight: Eclipse was the best of the bunch. Sad to say, that honor still belongs to the first film, with its unimprovable and entirely straight-faced contrast between the forces of eternal darkness and the rigors of high school. Nothing in this film quite matches that, although the moment near the beginning when Bella is grounded by her father for hanging out with the undead, comes close. For the most part it's back to the boring old forest, where that much-vaunted vampire army turn up for a replay of the hoedown that brought the second film to a climax. “Bunch of vampires trying to kill me,” shrugs Bella. “Same old, same old,” says Jacob. If there is an area where the third film scores highly, it is the cunning and persistence with which the plot seeks to tip Bella into Jacob’s arms. At one point, she and her two suitors await the forces of darkness in a freezing tent, with Edward unable to comfort the shivering Bella, it is warm-blooded Jacob who gets to snuggle. “Face it,” Jacob tells Edward, over Bella’s sleeping form. “I’m hotter than you” — a line which prompted the audience I was with to utter a collective whoop that would have stopped a herd of Pamplona bulls. If I were Pattinson’s agent I would get on this, like, tomorrow. That Jacob steals the show has nothing to do with Lautner, who has the charisma levels of a small potato, but the script, which keeps fencing Edward off from the action, both on the battlefield and off. He even turns down Bella when she comes on too strong in the bedroom, insisting they wait until they are married. “I’m old-fashioned that way,” he says. Count Dracula would be biting his knuckles in frustration over this kid. Stewart, meanwhile, looks put-out and moody, as she does through most of the series. If she is to have a career beyond these films, she is going to have to leave some of the sullenness behind, but the camera loves her, no question. It’s easy to knock the Twilight series, with their taste for cheesy special effects and teenage hyper-ventilation, but one has to honor the honest adoration coursing through their system — just your average old-fashioned romantic-masochistic teen-dream rapture. Only with sharper teeth. C+