You know, the problem with you Mel is... 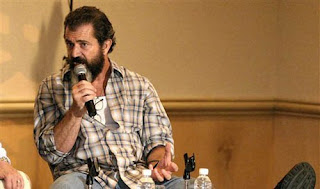 "His self-love is his most precious possession. It is the holy center of all that is sacred and right. He is hypersensitive about anybody who might splatter or disregard his greatness. If someone treats him slightingly, he perceives that as a deliberate and heinous attack. If someone threatens his reputation, he regards this as an act of blasphemy. He feels justified in punishing the attacker for this moral outrage. And because he plays by different rules, and because so much is at stake, he can be uninhibited in response. Everyone gets angry when they feel their self-worth is threatened, but for the narcissist, revenge is a holy cause and a moral obligation, demanding overwhelming force."

The only problem with this is: who does this not describe? I guess the religious phraseology is Brooks way of marking Gibson out from the rest of the pack by linking him with his films. But put any of our worst moments under the microscope and you'd end up with something similar (I had a similar visitation of holy rage just the other weekend when a huge truck blew on its horn for ten minutes right outside our living room. I walked down the middle of the road towards the truck, waving my arms for him to stop, asked he roll down his window and enjoyed a spirited exchange of philosophies on the subject of urban noise pollution. A similar scene is, I believe, enacted two-thirds of the way through Gibson's landmark film Mad Max II: The Road Warrior). On the other hand, Brooks column fails to mention the one thing this behaviour does point toward: alcohol. Gibson is now moving back to Australia, which is great news for the aspiring Aussie screenwriter who will write Gibson's comeback vehicle with Mel as a disgraced racing driver, coaxed out of retirement on his hog farm in Canberra when his daughter is kidnapped by post-apocalyptic desperadoes and forced to re-enter the Thunderdome once more.