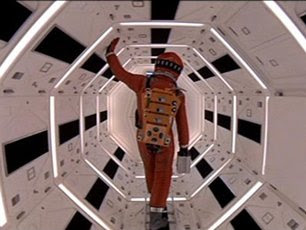 Perturbed by the blogger/critic rift over Inception, Sasha Stone has an interesting post digging upthe critical reception meted out to various landmark films over the years. Here's Bosley Crowther on Psycho:—

There is not an abundance of subtlety or the lately familiar Hitchcock bent toward significant and colorful scenery in this obviously low-budget job. With a minimum of complication, it gets off to a black-and-white start with the arrival of a fugitive girl with a stolen bankroll right at an eerie motel. The consequence in his denouement falls quite flat for us. But the acting is fair. Mr. Perkins and Miss Leigh perform with verve, and Vera Miles, John Gavin, and Martin Balsam do well enough in other roles.

Pearls before swine? It seems to me a perfectly accurate description of Psycho's faults. And here is Renata Adler review of 2001: A Space Odyssey.

And yet the uncompromising slowness of [2001: A Space Odyssey] makes it hard to sit through without talking—and people on all sides when I saw it were talking almost throughout the film. Very annoying. With all its attention to detail—a kind of reveling in its own I.Q.—the movie acknowledged no obligation to validate its conclusion for those, me for example, who are not science-fiction buffs. By the end, three unreconciled plot lines—the slabs, Dullea’s aging, the period bedroom—are simply left there like a Rorschach, with murky implications of theology. This is a long step outside the convention, some extra scripts seem required, and the all-purpose answer, “relativity,” does not really serve unless it can be verbalized.

Again: spot on. Stone's examples are instructive — but not in the way he intends.

what makes a critic different from a blogger now isn’t necessarily their opinion, or their “professional eye.” What makes them different is their being held to a higher standard by the outlet they work for, and their being edited and kept in check. Their writing is just flat out better than most of us self-starters who have kept ourselves going on our own passion for film and the passion of our readers.

Thia is right but it's only half the truth: film critics are not just the guys in possession of the fancier prose styles. It comes down to a question of judgment — and that's not to be mistaken for who's right and who's wrong. But who pays more scrupulouse attention to the ambivalence of their own reaction, in all its spotty, imperfect glory. The blogger/critic dust-up over Inception illustrates the divide between those who for whom love of a film means nothing less than full-throated devotion, coupled with a blindness to all its flaws — a kind of creeping politesse that insists on nary a bad word be said of the great and the good. The kind of writer for whome the words "genius" and "masterpiece" silence all internal debate. And those whose admiration for a film or filmmaker comes striated with a sense of its imperfections, who see no contradiction between loving a film and finding fault with it — the faults peg their admiration higher. The blogosphere seems sometimes to forget this. They mistake reverence for respect. They're strangely pious. Again: where are the outlaws?