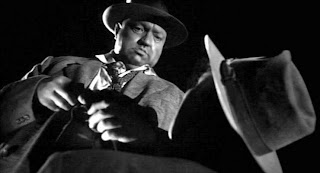 One of my favorite web writers, Nick Davis, takes issue with my recent post on the state of blogospheric — blogospherical? — film criticism. In it I'd tried to articular my disappointment with the stuff I was reading on the internet. What I most crave are voices that sound like your friends dissecting the film in the parking lot afterwards: sparky, conversational, unvarnished. What I get is a whole load of aspiring Eberts, aping the language of film criticism — "mise-en-scene," "limning" "pitch perfect" etc — without the judgment. Nick responds,

Is mise-en-scène really so hard a term to understand, or such an irrelevant term to film criticism worthy of the name? It strikes me as one thing to be rankled by hyperbole, clichés, groupthink, and lots of the other trends that flatten and homogenize so many film reviews, which seems to be your overarching beef. But to ridicule writers for using even the most essential terms related to the art they are critiquing? And in an age where more and more film programs and wider and wider access to them and more and more exposure to "insider" commentary means that many, many more than "six people" know what mise-en-scène is? Seems churlish, and inconsistent with your other gripes.

Despite the long tradition of hiring paid film critics even at major publications with no real background in film or film studies, I'd think one would want to encourage more film criticism that can actually articulate the aspects of a movie that provoked a critical reaction, rather than implying that simply writing from emotion is enough to constitute a "review." I wouldn't want to read music criticism that wasn't allowed to talk about melodic lines, or book criticism that couldn't talk about voice or syntax, or theater criticism that couldn't talk about blocking or alienation. Surely it's not an insult but a credit to a general readership, maybe even an obligation, to write arts criticism that bespeaks and presumes at least a rudimentary grasp of the arts in question. And if some essential terms require a bit of explaining from time to time, then critics ought to offer portals into that understanding, rather than making sure that no one reading a review—including some of the people writing those reviews—ever has to deal with anything except intuitive responses and non-specific comments about huge, undifferentiated categories like "writing" and "acting."

My problem with "mise-en-scene" is not that it means nothing, but that different writers mean different things by it. It means everything. So every time I see it used, I have to dig around in the the writer's back-catalogue to find out which definition we're going to be abiding by today — actually let's be frank, I don't do that, I simply move on. It's too much work for too little pay-off (they generally mean art direction). And I'm someone who's been writing and reading about film for over 20 years. Try my relatives. At root, this sounds like a difference of opinion about how professionalised film criticism should be. Nick invokes the example of literary and music criticism. And it's true: most of the audiences for either of those could be expected to know a fair bit of the professional vocabulary. But cinema is unique — a popular medium, it is the one form that has no need whatsoever of the academy*. This is a plus, not a minus. It means it is still alive. And I think that should be celebrated in language that is similarly vital. "Meaning follows usage," as my old linguistics professor never tired of telling me. Words with well-defined meanings flourish; those that don't die on the vine. If "mise-en-scene" truly is such an essential tool for divvying up cinematic achievement, how come it has signally failed to take off with the wider public? How come I haven't heard it spoken in the foyer of a cinema, not once?

*It goes without saying that Davis himself is one of the few academics who can write about cinema with verve, humor and conviction. He appears to be taking umbrage on behalf of writers far less gifted than himself. I think I know what he means by mise-n-scene. I think.