Make way! The King draws near! Make way for the king! 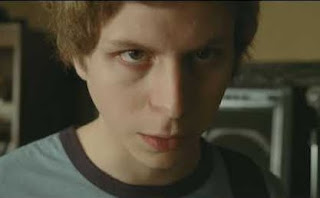 Todd Gilchrist finds himself dangerous close to having a critical opinion about Scott Pilgrim Versus the World over at Cinematical. He starts out okay.

"Even though I can't help but pre-emptively understand if some of my colleagues argue that it's too generationally narrow or even attention-deficient to leave a lasting impression, I really, really liked Scott Pilgrim, and think that it's one of the most technically astounding and yet personally resonant movies of the year."

A little too concerned with the other cars on the road but proceed.

"Michael Cera plays Scott Pilgrim, a dubiously-employed 22-year-old who entertains rock star fantasies as the bassist of The Sex Bomb".

So far so good. Then: disaster strikes! He's not sure if he likes Cera's performance. Eeek!

"Michael Cera has played a variation of this character before – several of them, in fact – and he sometimes fails to provide the resilience and indefatigable determination (instead contributing his trademarked Charlie Brown-style feckless optimism) that Scott needs to see his romance with Ramona through to the end."

Oh Sweet Jesus. No! You mean he's a fey, passive-aggressive pencil neck who couldn't act his way out of a chip packet? No! Surely not! Quick. What to do?

"But what's most surprising is how the movie sneaks up on you, and how it seems to know that these are its shortcomings, particularly at the beginning of the story. That I was initially bored by his dating life with Knives feels intentional in the context of the film's ending, and that he is sort of infuriatingly inactive becomes an integral part not only of the character but his eventual journey, both physical and emotional, as he navigates adversaries and obstacles of both varieties."

So Cera's infuriatingly inactive but it's integral to "his journey," and the dating scenes are slow as a setting cement but it's "intentional." For crying out loud. It's not Francis Ford Coppola we're dealing with here and even Coppola might just be able to hold himself together if Cinematical let slip with the occasional frown. But no, apparently Edgar Wright is so sensitive a creative flower that every comment must come sugar-coated, ever criticism soft-pedalled, every barb softened and proferred atop a bed of pink fuschia petals as the critic backs out of the room, blushing, curtseying and promising absolute fealty to his liege. What are these guys so terrified of? Why are they even reviewing? I want to smooth the matted hair from their troubled foreheads and tell them 'it's okay, you know. They're called opinions. It's perfectly natural to have them. It's a great idea, in fact, especially if you want to review movies. I think Cera is a little over-used myself. There, see? That wasn't so hard was it....'