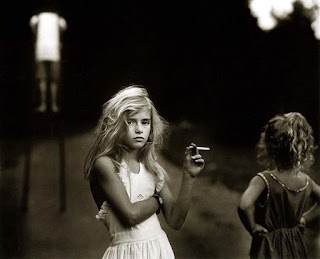 "When he picked up a pair of hitchhikers and allowed one of them to drive, the sideways image that he took shows the driver—a dead-eyed ringer for Richard Dreyfuss in “Close Encounters of the Third Kind”—in determined profile. Check the contact sheet at the back of the catalogue, and you come across the succeeding frame: same angle, same guy, but now with a definite grin—closer in mood, instantly, to the Dreyfuss who gunned his truck in pursuit of the alien craft, his face lit with chirpy wonder. Then there is the heroine of “The Americans,” an elevator girl from Miami Beach, of whom Jack Kerouac asked, in concluding his introduction to the U.S. edition: "And I say: That little ole lonely elevator girl looking up sighing in an elevator full of blurred demons, what’s her name & address?" Again, it is worth consulting the relevant contact strip: fourteen shots of the same woman, at least half of them catching her in the act of a smile—a polite gesture adopted for those riding beside her, you might say, but then professional courtesy is no less a national trait than the ruefulness on which Frank preferred to focus" — Anthony Lane, reviewing the Robert Frank exhibition in The New Yorker

I've often wondered whether people in photographs are as miserable as they look. Proper photographs, that is, by proper photographers: the kind who threw a camera in the back of a truck during the great depression and drove down to the dustbowl to take stark black and white pictures of people living stark black-and-white lives. Not your mum's holiday snaps. A few years ago, I was in an airport and there was this guy sitting opposite me in the terminal. He looked sunk in despair, sat there, being ignored by everyone around him, his face wan with the bad lighting. I thought to myself: If I was a photographer, that would make a great image of modern-day alienation and anomie. Then I caught myself, backed up a little, and thought: hang on, how do I really know that guy is miserable. I looked at him again. This time, I tried to imagine him thinking about the nice Turkey dinner that was waiting for him when he got home, his wife, his kids. He might not be showing it on the outside, but it was warming him from the inside. Before I knew it, I couldn't look at him without being convinced he was sitting on the most extraordinary secret. A photograph would never be able to capture it. In fact, a photograph would do the exact opposite: it would suggest he was locked in existential torpor when he wasn't.

And then I thought of all the photographs I've seen — in exhibitions, in books — where I assumed something similar. A sullen young mother during the Great Depression who can only be thinking about what a lousy time it was to have kids. A drag queen in New York during the fifties who just has to be thinking about the difficulties of being a drag queen in fifties New York. A corporate worker on the subway home, staring into his own personal abyss. How do I know they weren't thinking about a turkey dinner, too? Or maybe they were just thinking about the fact that some stranger they didn't know was pointing a camera at them. It doesn't happen every day. The act of being ambushed by a photographer doesn't exactly bring out the best in people. Who pulls on their game face for a stranger? You look back defiantly, sullenly. And as for being photographed on the sly, on the subway home, say, well forget it: who wouldn't look like a corporate worker ant crushed by the wheels of industry?