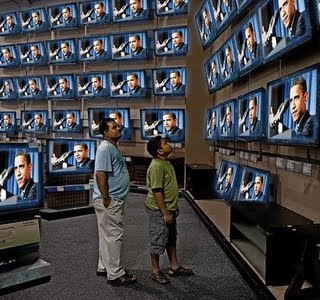 On MSNBC, Pat Buchanan is advancing his talking point du jour: that Obama's appearance on five news shows this weekend constitutes "overload." Politico and Drudge seem similarly excited. In my experience, this is one of those worries that is confined almost exclusively to those who keep track of weekend news-program scheduling, which is to say those who work in the media. But people can only watch one program at at a time, and most of them watch one news channel. The vast majority of people who catch Obama on TV this weekend will not be following him around the TV schedules, like presidential newshounds. They will watch the same program they always watch and if Obama happen to be on it, they will watch him. Quelle overload.