A whiz of a wiz, if ever a wiz there was 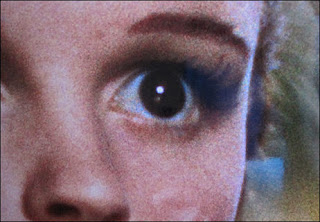 My friend Nat recently took me to task for that post I wrote about films losing their visceral power over time — Psycho losing its power to shock, Cary Grant films their power to ellicit belly laughs, etc. The conversation went something like this.

"Ive got a bone to pick with you"
"Uh-oh."
"That post you wrote about films losing their power to shock or make you laugh... What about Young Frankenstein?"
"Ah.... hmm.... I take your point. Young Frankenstein had me helpless with laughter, too, but look that was made in the seventies. That's pretty recent."
"So Alien, What's Up Doc...."
"God yes. They were all made while we were alive. I'm talking about Marx brothers comedies. Buster Keaton. That kind of thing. And I'm not saying I don't love those movies. In fact, love is what you get in exchange for them not having quite the same voltage. But we're kidding ourselves if we mistake the sepia-tinted affection with the jolt they once had. North By Northwest was once as exciting as Raiders of the Lost Ark. Probably more."
"I see. By 'old' you meant 'before we were born.'"
"Yes."
"So what about some young kid who watches The Wizard of Oz and is blown away?"
"I think when you're younger you have a more unjaundiced eye. Plus its not a comedy or a horror movie. Its only really the visceral genres that lose their punch. The old epics, particularly the epic romances, seem to do pretty well. We've actually got worse at making those."
"I see. You just pared away all that was reasonable about your argument and left the obnoxious part."
"A trick I learned."