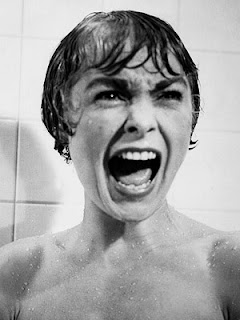 "I think that Psycho is a classic, but not because it was scary. In horror films, the scary things are not what I remember. I remember a style or a mood... it has to do with a personality that you feel in it as you watch what happens in it.” — Lars Von Trier

Old horror movies certainly don't frighten, just as old comedies don't make you laugh. It's a bit of a taboo subject among film critics: the weakening of a film's visceral power, over time. But it seems fairly obvious to anyone who's job doesn't rely on sounding knowledgeable about cinematic history. I love Cary Grant movies, for instance. I think His Girl Friday and Holiday as close to sacred texts as the 20th century has produced. But do I really laugh when I watch them? Proper, helpless laughter? I certainly admire the artistry with which the place where the laugh would have taken place is constructed. But that's not really the same thing is it? The same with Psycho. I can have fun conducting the act of historical reconstruction required to imagine how scary that film must have been to its original audience in 1960, but it's not quite the same thing as being scared myself. What happens to make up for it is they become much loved, classics, embalmed, like Norman Bates's mother. It's why I tend not to get too upset about remakes. They're generally terrible, of course, but I don't get all huffy and puffy and film-historical about it. I understand and even respect Hollywood's total, amnesiac devotion to the eternal present, although David Cronenberg's decision to remake his remake of The Fly may be pushing it. I like the woman in the cinema I overheard the other day who saw the trailer of Halloween II and went, "How many Halloween II's can there be?"