The man who knew too little 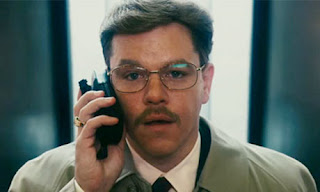 I've long been a fan of Matt Damon. He's smart and self-depracating and studious, knows his directors and acts like he's learning all the time, even if some complain that this makes him blend into the background. I like that about him. He's got the kind of face Hitchcock would love: the highest-watt smile this side of Julia Roberts, but equally capable of disappearing into the nearest crowd, which makes him great for thrillers. He's at his most anonymous-drab in The Informant, Steven Soderbergh's comedy about a corporate whistleblower (or as some people might prefer to call it, The Informant: Based on the Non-Fiction Bestseller The Informant by Kurt Eichenwald). The comedy was a bit sucked dry for me by the trailer, which skims off all the best jokes, all of which involve Damon's Closeauesque levels of indiscretion, as he goes about his spying tasks — over-narrating into his wire, tapping on cameras, etc. I was less familiar with the second half of the story, about which I won't reveal anything, but suffice to say it turns into a very Soderberghian character study — an onion which gets peeled, layer by layer, to reveal nothing in the centre. The film is unsatisfying in its own rather brilliant way. I came out and said to my friend Scott, "I'm a little confused about a couple of things... I just can't remember what they are." I really did! I couldn't remember what it was I didn't get. The first signs of senility.