The hot sun and cool moon of a mad, mad world 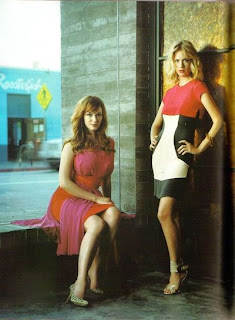 Anyone got a theory as to why January Jones and Christina Hendricks weren't up for Emmies last night? I've looked at last year's awards: nothing there either. Is it straightforward industry-hack snobbery about glamorous women? Another instance of Hollywood's sack-cloth-and-ashes approach to aesthetic merit? If so its a terrible shame. Both Jones and Hendricks are the twin suns around whom the Mad Men universe revolves — or rather, fiery sun and cool moon — orbiting but never meeting. They should both be receiving barrowfuls of awards, though the new season hasn't given them much to work with, I regret to say. The imminent departure of Joan, Betsy's new baby, the British takeover: all these plotlines seem not to know why they were summoned. Witness last night's episode in which the new Brit boss was banished to India by his superiors, to be replaced by another new Brit, only to have this one's toes chewed up in a freak lawn-mower accident. It was back to square one: a plot development that did no developing, existing in order to erase itself. Much of the new season is like this: tentative, mealy-mouthed, fearful of commitment. The air of minimalism is fine up to a point, but it makes me long for the old fashioned melodrama of a show like Dallas or Dynasty. Come on fellas, its yanks versus Brits! Lets see the fur fly. Let's see stolen accounts, and shouting matches. Let's see some money changing hands. Lets see some advertising. Remember that? Everyone lounges around as if enjoying a lazy weekend at the country club. Roger Sterling is the only one letting off rockets — "Its like Iwo Jima in here" he quipped of the lawn-mower incident. My fervent wish is that Don Draper will fall off the monogamy wagon and Joan's useless hubby will soon top himself, this freeing her to cruise that office like a battleship once again. May she and Betsy never exchange a word of dialogue. It would be all wrong — like catching Monroe and Jackie O in the same shot.