Revisiting the scene of the crime 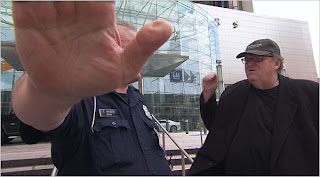 "Is this the queue for Coco Before Chanel?"
"No Capitalism."
It's always fun to queue for an ism.
Capitalism: a Love Story looked to me like one of those career-summarising projects which filmmakers ought always to be gently steered away from making. You know, the ones that result when the artist, not content with making a project about a specific subject, ascends to a loftier, more abstract plane in which they examine their raison d'etre as artists, spell out what had been happily subtextual and finally get down to setting down What They Believe. I'm thinking of David Fincher's Fight Club, which lectured us on the aesthetic philosophy so beautifully implicit in Se7en. Or Spielberg's Hook, which went public with the Peter Pan analogy that had been happily underscoring Spielberg's career from its inception. The idea of Michael Moore spelling out his beef with capitalism is a bit like Michael Moore telling you how he voted: you don't really need to know.

But it wasn't like that, or only a bit. Yes, his interview with Wallace Shawn is a portrait of two men in perfect agreement with themselves. And yes, he never really marks out his perimeter, hopping, disconnectedly, from General Motors, FDR, the second world war, to Wallstreet Derivatices, the 08 collapse and Obama's election, with one too many stopovers in his hometown of Flint, Michegan, for me to be able to feel that he was really telling the history of Western Capitalism, per se. And yet individual sequences have terrific power: the scandal surrounding a for-profit juvenile detention center in Wilkes-Barre, Pa., in which two judges got millions of dollars in kickbacks for sending more than a thousand juveniles to the establishment; the stuff about corporations getting rich off their employees when they die by taking out life insurance policies on them, unbeknownst to even their next of kin — all this was genuinely shocking. And without ever quite persuading me that the bail out was unnecessary, he nevertheless stirred up enough outrage at how few strings were attached to the money that his stunts ellicited cathartic belly laughs. As many on the Libertarian Right, as on the Democratic Left, will get a kick out of seeing Michael Moore trying to make a citizen's arrest of AIG executives, or circling the head quarters of Citibank and Bank of America with crime-scene masking tape.