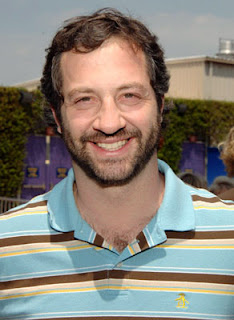 No 6 in Time magazine's list of tips for filmmakers is "Out Apatow Apatow. Raunchy comedy The Hangover was a surprise hit: cost 35 million, grossed 270 million." I'm always amazed by critics and journalists who characterise Apatow's movies as "raunchy" or "grossout". The New York Times calls him "the 41-year-old auteur of gross-out comedies." Really? That's what you remember? What distinguishes Apatow is the painful honesty of the writing — the line in Knocked Up when Leslie Mann says“You think because you don’t yell that you’re not mean. This is mean.” The chest-waxing and the gyneocologist jokes, you can get anywhere. I guess it doesn't sound as good: Judd Apatow, king of pain.