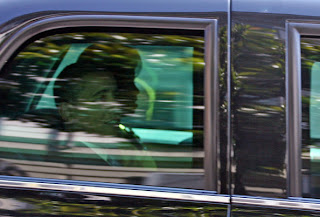 I just saw Obama's limo. I was in the deli when the guy ahead of me in the queue telling a story about someone driving past him with his windows down. "He just saw Obama," explained the cashier when I reached her.
"Really."
"He's in town to speak to Wall Street."
"Wow."
I got out my ipohone, found out that he was due to have lunch with Bill Clinton at Il Mulino, and headed down there. I joined a large crowd on the corner West 3rd and La Guardia place, held back by metal barricades. About three blocks had been closed off. We couldn't see much, just a mass of police cars about a block away, their lights flashing, but the crowd seemed happy to collect, everyone taking turns to tell newcomers what was going on.
"Obama's having lunch."
"Really? Wow."
One woman asks me what was going on.
"Obama's having lunch with Bill Clinton," I tell her.
"Huh. And they didn't ask me," she says and wanders off.
Another guy deadpans, "boring," to laughter, then takes out his camera like everyone else.
Finally there is movement: a helicopter overhead and a phalanx of bodygaurds walking down the street towards us, waving people back from their fire-escapes. The crowd push forward against the barricade. The police cars whoop. There is a flash of sunlight in a window, and a big black limo swings into view... then disappears down Thompson street, a block away. He's not coming out way, after all.
"Oh Obama," said one girl, before walking off.