The worst film title in the history of cinema 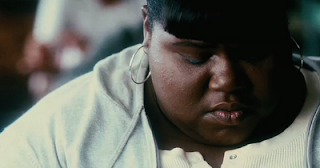 Look I'm sure the film is terrific — harrowing, grim, uplifting etc. It just won the Audience award at Toronto, and may be strong contender for the Best film Oscar. Oprah loves it and everything. But please, someone do something about that title: Precious, Based on the Novel 'Push' by Sapphire. Seriously. It's not Casablanca. For one thing, you could interchange any of those three elements and no-one would be the wiser:

Who is Sapphire and why have they gotten this treatment? Michael Crichton didn't merit it. It wasn't called Jurassic Park: Based on the Thrilling Bestseller Jurassic Park by Michael Crichton. It was just Jurassic Park. It wasn't Jaws: Based on the Ripping New Peter Benchley Novel. It was just Jaws. And rightly so. What's so precious about Precious? Presumably they were trying to make contact with readers of the book, but surely a simple tagline — "Adapted from the bestseller Push by Sapphire" — would have sufficed, as it has done for every other author in the history if cinema, from William Faulkner to Helen Fielding. Why deface the title? Is Sapphire really so famous that he/she gets to barge to the very top of the bill? If so, why have I never heard of them? I wonder what they will do for the movie tie-in edition of the book. "Push. By Sapphire. Now a Major Motion Picture Called Precious, Based On the Novel 'Push,' by Sapphire."