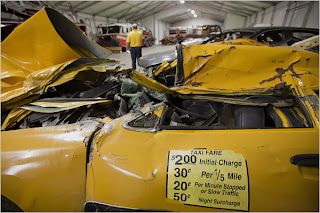 Debris from the World Trade Center is stored in an 80,000-square-foot hangar at Kennedy International Airport. The humidity is regulated so the steel does not rust. The FBI interrogator Ali Soufan, who extracted page after page of actionable intelligence from Abu Zubaydah using nothing more than a plateful of Oreos (and whom the 9/11 commission deemed "one of the more impressive intelligence agents -- from any agency -- that we encountered in our work"), recently broke his silence:-

It is surprising, as the eighth anniversary of 9/11 approaches, that none of Al Qaeda’s top leadership is in our custody. One damaging consequence of the harsh interrogation program was that the expert interrogators whose skills were deemed unnecessary to the new methods were forced out. Mr. Mohammed knew the location of most, if not all, of the members of Al Qaeda’s leadership council, and possibly of every covert cell around the world. One can only imagine who else we could have captured, or what attacks we might have disrupted, if Mr. Mohammed had been questioned by the experts who knew the most about him.