How To tips on heckling 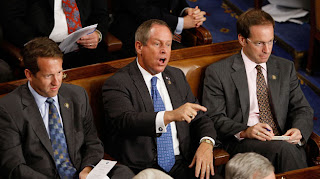 So Joe Wilson has decided to introduce British style heckling into the house of congress. There's just one small detail he didn't get right: when you heckle the prime minister in the UK, it is because you have caught him out in a bit of flannel so obvious, so self-evident, that it is all you can do to register your beggared credulity.

Language and expressions used in the Chamber must conform to a number of rules. Erskine May states "good temper and moderation are the characteristics of parliamentary language". Objection has been taken both to individual words and to sentences and constructions in the case of the former, to insulting, coarse, or abusive language (particularly as applied to other Members); and of the latter, to charges of lying or being drunk and misrepresentation of the words of another. Among the words to which Speakers have objected over the years have been blackguard, coward, git, guttersnipe, hooligan, rat, swine, stoolpigeon and traitor. Members sometimes use considerable ingenuity to circumvent these rules (as when, for instance, Winston Churchill substituted the phrase "terminological inexactitude" for "lie") but they must be careful to obey the Speaker's directions, as a Member who refuses to retract an offending expression may be named or required to withdraw from the Chamber.

You do not, as Wilson did, heckle the speaker because he has blown your cover with your constituents. This morning, predictably enough, the media looked into who was right and found — doh! — that it was Obama. Factcheck.org:

Nothing in this subtitle shall allow Federal payments for affordability credits on behalf of individuals who are not lawfully present in the United States.