The world of Zidane 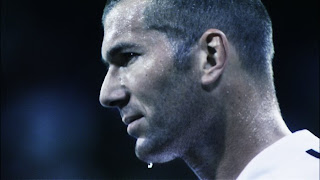 Ed Smith reviews Zidane – a 21st Century Portrait, a real-time replay of a match between Real Madrid and Villarreal on 23rd April 2005, using 17 synchronized cameras focused exclusively on Zidane throughout the match, from first kick to the last:

"Zidane does up his socks; he kicks his toes into the turf like Jimmy Connors used to at Wimbledon; he wipes sweat from face; he scarcely speaks; he doesn’t smile for the first hour. His only words in the first half are to the referee, immediately after the opposition have been awarded a penalty and scored. “You should be ashamed of yourself”, Zidane says very quietly and with no emotion. In case the referee missed it, he repeats, 'You should be ashamed of yourself'... With Real Madrid 1-0 down, Zidane makes a mesmerizing run and sets up the perfect cross for his team-mate to head into the goal. But our view is only of Zidane – and he is expressionless as the goal is scored... He is doing his job so well, there is not space to worry about whether other people are also doing theirs. Zidane is often almost still, barely trotting around. When he moves, it is for a reason – in his own mind, it will be a decisive move. With extraordinary prescience, the film ends with Zidane playing beautiful football but becoming enveloped by red mist. He is sent off. A year and a bit later, on a still bigger stage, again having defined the contest, the same thing would happen to him in the World Cup Final. Zidane leaves the field, and this film, with no remorse and little emotion. Things are still just as they are in Zidane’s world."