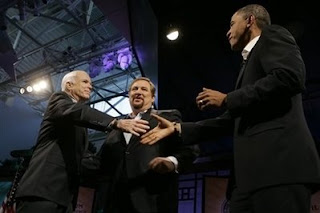 I went to bed last night depressed. McCain did a better job than Obama at the faith forum. He didn't sound like a man of faith, he gave short simple answers: Drill now, defeat evil, etc. Obama gave long thoughtful answers that indicated some kind of spiritual compass: not what the audience had come to hear, funnily enough. They had come for chunks of red meat. They recognised that old rascally Republican DNA in the air — bellicose, simple, exciting — and responded to it, as if to the cologne of their favorite gigolo. Which makes me think the country is poised on the cusp of repeating exactly the same mistake they made with Bush. We recognise, reluctantly, the mistake of voting for belligerent men who think with their gut. And yet, how hard it is to kick the habit! How seductive they are! Maybe this one will be different!

(By the way, when Obama said that deciding the issue of abortion was "above my pay grade" he meant, not "there's not a job on the planet above the pay grade of the President of the United States," but: I am not God.)