Wedding bells on the waterfront 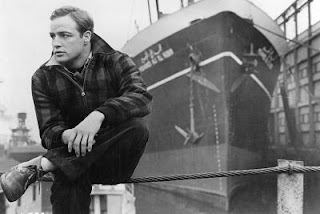 “He was a remarkable man he really was. When I first told Kazan he thought I was making it up so I took him to a lunch where Corridan was enraged by something the Catholic arch diocesese had done. He was swearing at the top his lungs — ‘goddamit I’m going to get that goddamn sonofabitch.....’ As we left I said well what do you think?” Kazan replied, “I honestly don’t think that man’s a priest. Now I see why you want to make him the centerpiece of the movie."

— Budd Schulberg, interviewed by me in the Gaurdian this week. Father John Corridan was the Jesuit priest who took on the Mob gangsters who ran the piers of New York Harbor. He was a priest at St. Francis Xavier Parish on 16th Street, the church where Kate and I are getting married later this year.