How the Arugula war was won (UK edition) 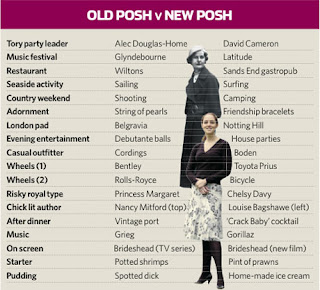 "Everything that I, as a paid-up, Guardian-reading, organic muesli-eating, Red Ken-voting, farmers' market-visiting, lentil-cooking, metropolitan-living, city cyclist, hold dear — being nice to battery chickens and veal calves, buying fish that has been caught by a grizzled old man using nothing more technologically advanced than a bit of a string, buying only the most humanitarian coffee beans known to man — suddenly all these things seem to have become not only part of the Conservative party manifesto but also, and believe me, it pains me to say this, posh.... one minute, the bicycles and the muesli and the lentils were all manifestations of a certain home-spun knit-your-own-hemp-socks leftiedom as practised by what the Daily Mail used to call the tofu classes. And the next you're reading an interview with David Cameron in the Daily Mail and there he is saying that he knits his own hemp socks and actually bathes in organic tofu.

It's just so confusing. Because back in the days when Tories charged around in their 4x4s and shot things out of hedgerows, you could just ignore them and know you never wanted to be one of them. Bloodsports and ridiculous young toffs were Tories. Or as Bridget Jones put it back in 1997, 'it is perfectly obvious that Labour stands for sharing, kindness, gays, single mothers and Nelson Mandela as opposed to braying bossy men having affairs with everyone shag shag shag left right and centre and going to the Ritz in Paris then telling all the presenters off on the Today programme." — Carole Cadwallad, The Observer