The houses have legs 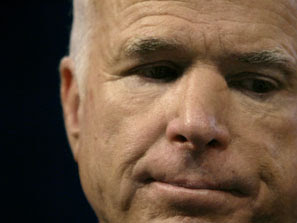 Finally, the Obama campaign hit gold. The fact that McCain couldn't remember how many houses he has is a damaging and hilarious fact: that makes it endlessly repeatable. (The fact that he was, in all likelihood, only pretending not to remember only makes it the more painful). McCain has hit back with the allegations about Obama's associations with Tony Rezko, but the main problem here over-complication. I'm still not sure what it is Obama is supposed have done. Moreover, McCain has spent the last month telling us this guy is Britney Spears, the political equivalent of Pepsi — bland, popular, empty. Reverting to plan A (portraying him as a shady radical with criminal associations) feels, at this point, like the leftover from another campaign. The charge lacks the element of simplicity and truth necessary to make it stick. That's why the celebrity ads were so effective. They picked up on something everyone knew about Obama (he's popular) and turned that positive into a negative. Obama has now done the same. Everyone knows McCain is rich: now that fact links up with his economic heedlessness, and his age. Synergy.