Whose war is this? (Clue: its not yours) 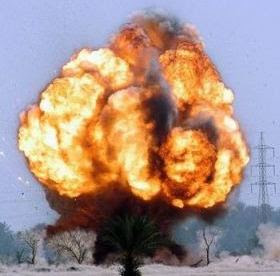 Obama has returned fire on McCain's charge that he would "lose a war in order to win an election", rightly defending himself from the insult on his patriotism. But what about the implied insult to the voters? It is no less strong.

Let's unpack the logic: 1) voters want to end the war. 2) Obama will win the election by appealing to those voters. 3) McCain dislikes Obama for doing this. What McCain doesn't seem to have noticed is that by snarling at Obama for this move, he's also snarling at the voters themselves. For what he implies is that the voters' desire to end the war is nothing but lily-livered foolishness. The idea that we might oppose the war because we genuinely, and in good faith, think it a bad idea simply doesn't occur to him. We are simply fools, to be duped or countermanded.

Hence the need for men like Bush and McCain to tell us only so much as they think we need to know, in order to get the go-ahead to pursue their war, for reasons known only to themselves. In other words: get your hands off my war, I know best, trust me. You know what? I don't and here's why: there is not a single instance in John McCain's career in which he decided that military force was not the answer. He believes we should have stayed in Vietnam. In 1990, four months after Saddam Hussein invaded Kuwait he asserted that "the peace and security of the world for future generations [demand] that the world community act decisively to end the Gulf Crisis now." In January 1994, he described North Korea's nuclear weapons program as "the most dangerous and immediate expression" of "the greatest challenge to U.S. security and world stability today." In an April 1999 he said that "America's most important values—life, liberty and the pursuit of happiness—are under vicious assault by the Milosevic regime," requiring mobilization of "infantry and armored divisions for a possible ground war." In 2001, he was calling for war with Iraq six months before Bush was (“Next up, Baghdad!”) and has not wavered in his belief that military occupation is the best way to deal with terrorism —"this is a transcendent struggle between good and evil. Everything we stand for and believe in is at stake here." Really? Most experts give Al Qeada precisely zero chance of winning.

And now here he is saying that Russia's invasion of Georgia was "the first probably serious crisis internationally since the end of the Cold War." A demonstrable untruth. Max Bergman summarises:

The big concern with a McCain presidency – a concern which I am surprised has not been vocalized more fully – is that the U.S. will lurch from crisis to crisis, confrontation to confrontation, whether it be with Iran, North Korea, Russia, Syria, Saudi Arabia, etc. The danger is that McCain’s pundit-like rhetoric will entrap the U.S. in descending spiral of foreign policy brinksmanship. Just think about the very likely scenario of McCain giving Iran/Russia a rhetorical ultimatum and Iran/Russia ignoring it. Now we are stuck - either we lose face by not following through on our threats or we follow through and go to war. We can’t afford such a reckless approach after the last eight years.