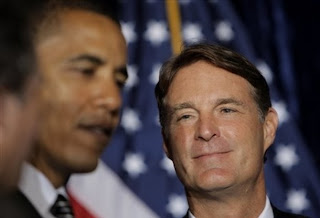 I've been looking for opportunities to test out my newfound predictive powers about American electoral politics, so here's one: Obama is going to get a much bigger bump in the polls from his choice of running mate than McCain.

Here's why: Obama's choice, no matter who it is, is going to be reassuring to voters. They will be white, they will hail from the heartland, they will serve to root Obama, particularly if he chooses from the midwest. Similarly, the sense of him being a preening narcissist at the centre of an Obama cult will recede: "The One" will no longer seem like such a good insult when he's two. He's a team player by nature, he'll look good with a buddy, his glamor is like Sinatra's and Kennedy's: its contagious.

McCain by contrast, is going to look like one part of the Odd Couple, no matter who he picks. He's a maverick, a flyboy, a solo player. Partnership cramps his style. (Look at the marriage). When he veers off-message, we'll notice it more. If its Romney or Pawlenty or Jindal, you'll look at the picture and try not to wish them swapped. Thinking about this, in fact, the more absurd it seems that McCain is accusing Obama of self-centredness. The pilot is accusing the bastketball player he doesn't play well with others?