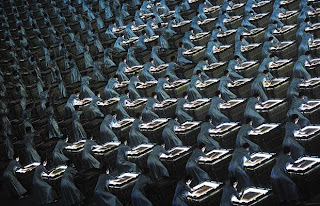 Spielberg would have loved it. Zhang Yimou's opening ceremony for the Bejing games was an awe-inspiring, eye-boggling, even moving, epic. A blockbuster up there with his best. Above all it was fascinatingly foreign. Too often these things are marred by overinflated international symbolism of the save-the-world and bless-the-chilluns variety — visual esperanto, used by no-one outside of Olympic ceremony committee meetings. There was a fair bit of that last night. But as the teeming multitudes met and coalesced, dispersed and reformed in a manner somewhere between a communist march and a microchip approaching orgasm, it was possible to catch something more genuinely Chinese, something genuinely alien, even a little scary, and no less beautiful for that.